An 11-acre, Taliesin-like landmark in Raleigh N.C. is about to be transformed into low-income housing.

Landscape architect Dick Bell’s Water Garden was conceived in the mid-‘50s as a Shangri-La for the creative community in central North Carolina.

It was decades ahead of its time.

The well-known landscape architect developed it as the city’s first mixed-use development for artists and designers in 1955, though he wouldn’t actually complete it for 14 years.  It was to be his home, his business and his landscape laboratory.  It also served as studio and gallery for those in need.

“Water Garden was an ace in the hole,” Dick said. “It was an epistle of site plan and architecture.” 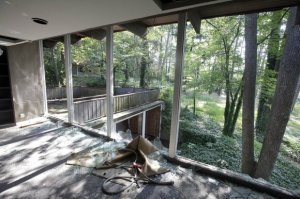 This N&O photo was taken inside (looking out) of what used to be my office...

RALEIGH — In its time, the Water Garden stood as a shrine to modern design: a complex of low-slung, hill-hugging offices surrounded by tall, ivy-covered pine trees and ponds topped with lily pads.

You’d never guess from the car dealerships and furniture warehouses that such a gem stood hidden off Glenwood Avenue. And for the last three years, the complex has slowly rotted and gathered squatters’ trash.

But now the site of the 11-acre Water Garden campus, home and life’s work of master landscape architect Dick Bell, is being put to use. Starting next spring, its lush and rolling hills will be converted to low-income housing in a northwest Raleigh neighborhood where it is sorely needed.

I started out with only a Facebook status update and the vague directions “across from the Carmax on Glenwood” to go on. An hour and a half later, I found the Water Garden. 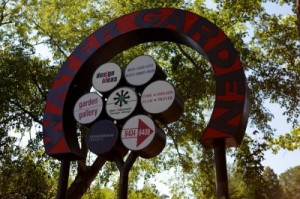 (Many thanks to all who posted comments on Goodnight, Raleigh —  including the current owner whose intentions for the future of Water Garden are well-meaning indeed.)

As I was growing up in Manteo and Elizabeth City, North Carolina, during the Great Depression of the ‘30s, I fell I love with the adventures of Tom Sawyer and Huckleberry Finn. I loved to lose myself in their world as they white-washed fences, ran errands for their parents, slipped away to raft and fish the Mississippi River,

My buddy Billy Hackett (left) and me at play on Roanoke Island.

studied the currents and dangers of the shoals, and came to know intimately the land forms they traversed. Every day was a learning experience for them. But despite the fun and adventures they had, the ultimate goal was survival.

Actually, life outside of that fascinating literary world was much the same for me at the time. Survival was the ultimate goal – with a little fun and adventure mixed in to keep it interesting! But every single day my parents had to struggle to provide the basic necessities of food, shelter and clothing for our little family. Those things most of us take for granted today were hard-won goals back then.

Mom and Dad in Manteo

In his own right, my father was a pioneer. A self-taught man, he designed and built the first replica of Fort Raleigh in Manteo and, soon thereafter, “The Lost Colony” amphitheater. (Many other outdoor drama amphitheaters would follow.) A British immigrant, he first had to learn the nature of the new place he called home and how he could care for it and manipulate it to make a life for himself and his family. Meanwhile, my mother was blazing her own trail as she raised her children and created the first plant nursery on Roanoke Island. Creativity and determination propelled my parents as the dreamed, scheme and struggled against difficult circumstances and odds.